With the OECD and the UK Bribery Act both focusing on the specific issue of companies bribing public officials abroad, interactions between businesses and their host governments around the world have never been more closely scrutinised.

However, data gathered by anti-corruption experts in the area of government and regulatory affairs continues to raise concerns.
This remains one of the top three areas in which companies assessed by GoodCorporation fail to meet requirements and expectations.

Basic rules on lobbying and political interactions, for example, were found last year to be inadequate in 34% of cases. Basic controls, such as written registers of government intermediaries, became less adequate in the period between 2014 and last year. Almost half of the companies assessed failed to provide sufficient training on how to handle requests for facilitation payments from public officials.

As part of the Pearl Initiative’s Combating Corruption series, this webinar will examine the increasing importance of government and regulatory affairs in mitigating bribery risk.
It will examine data taken from over 100 on-site anti-bribery and corruption assessments over the past 10 years, in which more than 7,000 business practices have been put to the test.

From this data, we will identify those areas of government interaction where companies most often fail, and the examples of best practice which can help companies to remain compliant in this famously high-risk area.

The following areas will be discussed in detail:
– How to assess bribery and corruption controls
– The role of interactions with government / regulators in international anti-bribery and corruption regulation
– Data from over 100 on-site assessments, showing how well companies are performing in this area
– Examples of where companies most often fail
– Examples of best practice in approaching regulatory affairs and government
– Expert advice on how companies can overcome the complexities and establish meaningful controls in this area 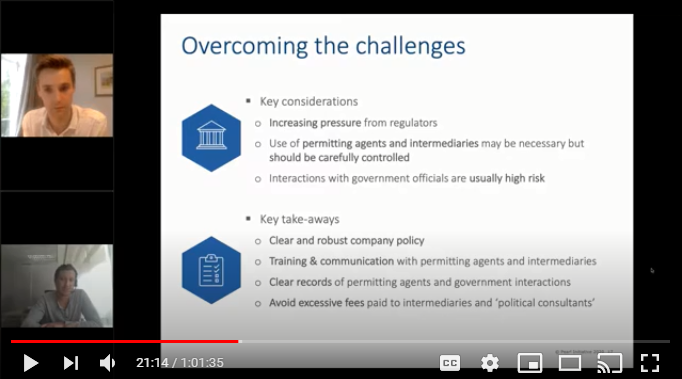