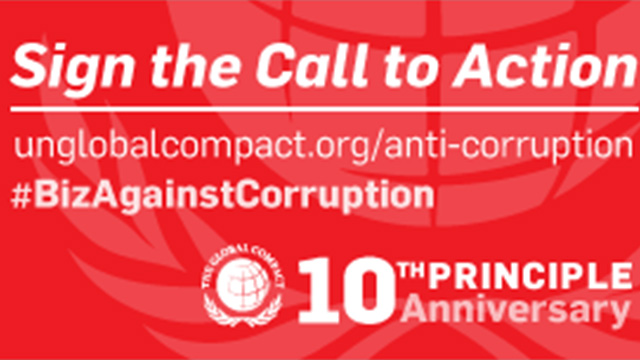 The Pearl Initiative works closely with the UN Global Compact and I recently participated in their Working Group task force meeting on the 10th Principle against Corruption. As a result, I’d like to highlight, in this blog, some of the valuable initiatives and resources available through the work of the Global Compact in this area.

Corruption can take many forms, varying in degree from the minor use of influence to institutionalised bribery. Transparency International defines corruption as “the abuse of entrusted power for private gain”. This can mean not only financial gain but also non-financial advantages.
The OECD defines extortion in this way: “the solicitation of bribes is the act of asking or enticing another to commit bribery. It becomes extortion when this demand is accompanied by threats that endanger the personal integrity or the life of the private actors involved.”
Transparency International defines bribery as “an offer or receipt of any gift, loan, fee, reward or other advantage to or from any person as an inducement to do something which is dishonest, illegal or a breach of trust, in the conduct of the enterprise’s business.”
Practical Implementation of the 10th Principle

The UN Global Compact suggests that businesses consider the following 3 elements when fighting corruption and implementing the 10th principle:

The most recent anti-corruption tools and resources published by the UN Global Compact can be found here.

One of the most downloaded practical guides on the UN Global Compact website is the Guide for Anti-Corruption Risk Assessment, published in 2013.

The UN Global Compact also initiated the development of the Anti-Corruption Tools Inventory on the Business Anti-Corruption Portal. The inventory consists of existing anti-corruption tools and resources presented in alphabetical order that companies can easily review and access.

This week, the UN Global Compact has launched a Call to Action: Anti-Corruption and the Global Development Agenda, whereby the Private Sector calls upon Governments to promote anti-corruption measures and implement policies to establish systems of good governance.

The Call to Action contains five appeals to Governments described in depth in their flyer and Frequently Asked Questions.

The Call to Action will be forwarded to UN Secretary General Ban Ki-Moon to highlight the private sector’s continuing efforts to work with other stakeholders to address corruption. Signatories will also be acknowledged at the UN Global Compact 10th Principle Anniversary event on 10 December 2014 in New York. The 10th Principle Anniversary event will bring together representatives from business and other key stakeholders to highlight achievements in the fight against corruption and discuss innovative forms of collective action and emerging anti-corruption measures.