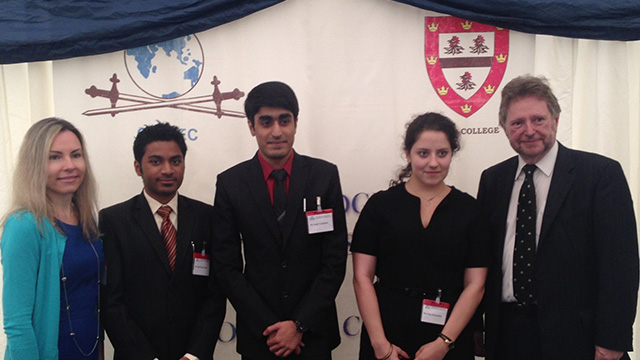 The Cambridge International Symposium on Economic Crime was a great opportunity to not only gain valuable knowledge, but also to interact with individuals coming from different backgrounds and of different nationalities. When not attending workshops, or the keynote speeches by important personalities, there were always opportunities to network with the other delegates at the symposium.

I believe the symposium has helped us improve our networking and communication skills, and has made us more dynamic. The exposure to individuals of various professions, each having a unique personality explaining different aspects of their work experience, has enriched us by getting to know more about the respective fields they worked in. Even though we were students, having not worked professionally earlier, and the other delegates were much more highly qualified, it never was a barrier for us to be interacting with them nonetheless. Each day of the symposium, there were short sessions such as coffee breaks or cocktails, wherein we were encouraged to network with the other delegates, and introduce ourselves. Every day we met a new set of individuals, and learnt about their work culture in their respective countries, and certain laws that differed. We gained experience on how to approach people, and initiate conversations.

We were encouraged to be more open, and converse with a different set of individuals every time there was a gathering for a break. This way, we could meet more people, and further educate ourselves from the varied experiences that they shared with us.

Another highly motivating aspect of the symposium, in connecting people who have come from all over the world, were the dinners held at the college itself. Each night, the delegates were assigned particular seats in the dining hall, such that, every night the delegate would be dining with a new set of people, whom he/she might have never met before. This, like the coffee breaks or sessions, helped again in meeting new people. Since the dinners went on for two to three hours, it was sufficient time to get introduced, and learn about each other.

We met interesting personalities including two senior analysts from Anti Money Laundering department of the German government, a financial investigator from the Canadian Police, a Professor who is an expert in the field of Islamic Corporate Finance from The National University of Malaysia, and an Integrity and Law Manager from ICEAW. These were just a few, of the many that we interacted with, during our time at the symposium.

In conclusion, it was an extremely benefitting experience that has brought about noticeable changes in our characters. We have learnt to be more approachable, charismatic, and striking. Our talks have become more mature, after spending time with such delegates, and have learnt how to keep the conversation going, keeping it interesting at the same time. It was a fantastic opportunity that was given to us, and we are grateful to the Pearl Initiative.